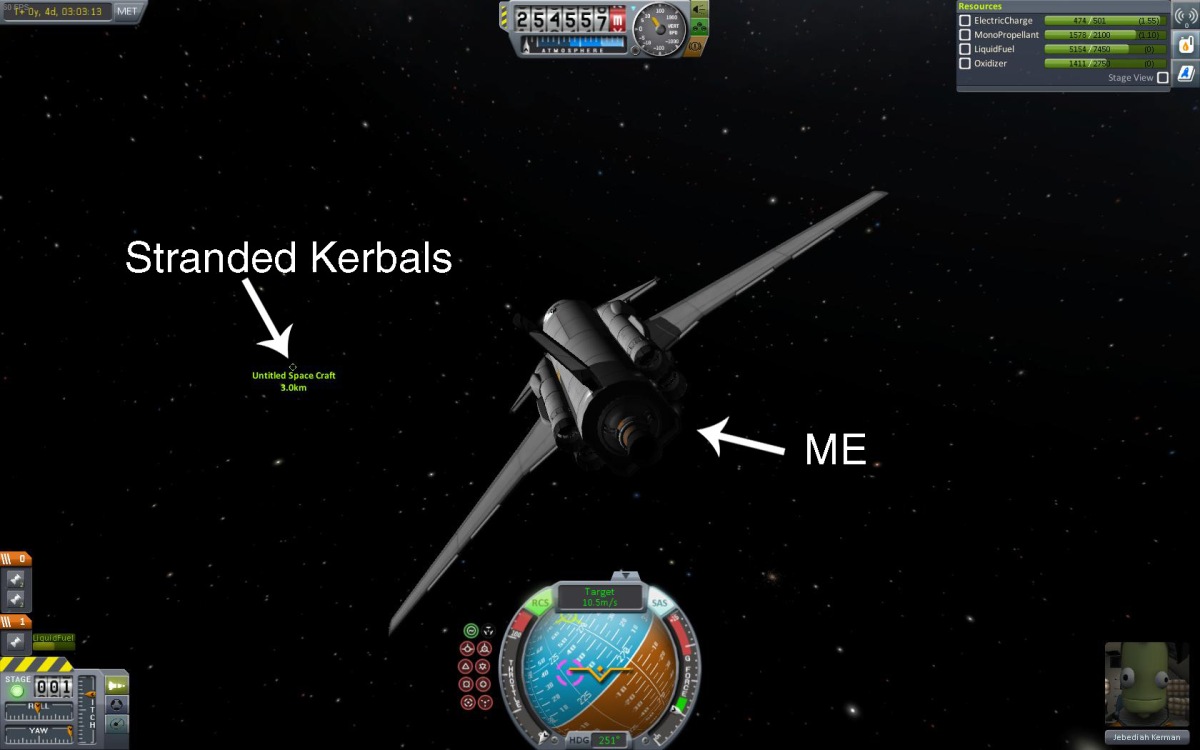 Things rarely go according to plan in Kerbal Space Program. And that’s kind of sad since my plan was so simple there was almost no room for anything to go wrong. It’s been a while since I’ve spent quality time with the game, so I wanted to get reacquainted. Build a rocket, launch it into orbit, and bring it back. No fancy maneuvers, no tricks, just a simple up and down. Easy stuff we humans mastered back in the 1960s. But Kerbal space program doesn’t have humans, it has tiny green people called Kerbals. And it doesn’t take place in the 1960s, it’s all happening in the here and now. Anything goes, since you’re the one responsible for everything. My plan to get reacquainted had three simple parts. Part one, building a rocket, was easier than ever. Part two, launching it into a stable orbit above Kerbin, went off without a hitch. Part three, returning my brave Kerbalnauts back to the planet, is where things got a little complicated. How complicated? Well, have a look for yourself:

There’s a crew capsule in orbit around Kerbin. That’s the good news. There’s only a crew capsule in orbit around Kerbin. That’s the bad news. It’s bad because the crew capsule is no longer attached to an engine. Or maneuvering thrusters. Or any other spaceship parts that allow it to move under its own power. So it’s stuck in orbit around the planet with no way to move. How did it happen? I blame it on my love of pushing buttons. In this wonderful game the space bar, which I would like to remind you is the largest key on your keyboard, is bound to a command called simply ‘next stage’. You see, each craft in Kerbal Space Program can be broken into different sections or stages that are activated in sequence. One stage may activate solid-rocket boosters, while the next fires a liquid-fuel engine, and the next one jettisons spent fuel tanks, and so on. Having a firm grasp of staging is essential to building and controlling a rocket that does what you want it to. As long as you press the button at the right time. In this case, I accidentally pressed the button to separate my crew capsule from its method of propulsion at the worst possible time.

Having three brave explorers trapped in permanent orbit isn’t the way I wanted to return to a game I love dearly, so I decided to mount a rescue mission. No Kerbals left behind! If a rescue mission is worth doing, it’s worth overdoing! A boring old rocket isn’t good enough here. No, I created a Gigantic Recovery Plane with a cargo bay large enough to contain the stranded space capsule. This vehicle would dock with the drifting capsule and then capture it and keep it safely contained within the cargo bay. Say hello to the GRV:

The design required a few test flights and subsequent modifications before it was powerful enough and maneuverable enough to fly easily. Once it got to a point where it handled fairly well in the air I had to do something I’ve never done in Kerbal Space Program: land a plane.

It went better than I expected.

The cockpit is all that survived my first landing attempt. The key word there is “survived”. Before you write that off as a failure, please observe that the ever-brave Jebediah Kerman is still alive and smiling. Any day where your Kerbonauts are alive and on the ground after a flight is a good day. A second test flight proved that I did have what it takes to safely land the plane. At this point, I’m confident that as long as the GRV makes it back into the atmosphere I can get it landed safely. But let’s not get too far ahead of ourselves here. Before I can return it to the surface I need to get it up into space to start with. And for that, I need a rocket. A really, really big rocket. With eighteen solid-rocket boosters. Say hello to the Giant Recovery Vehicle Launch Rocket: 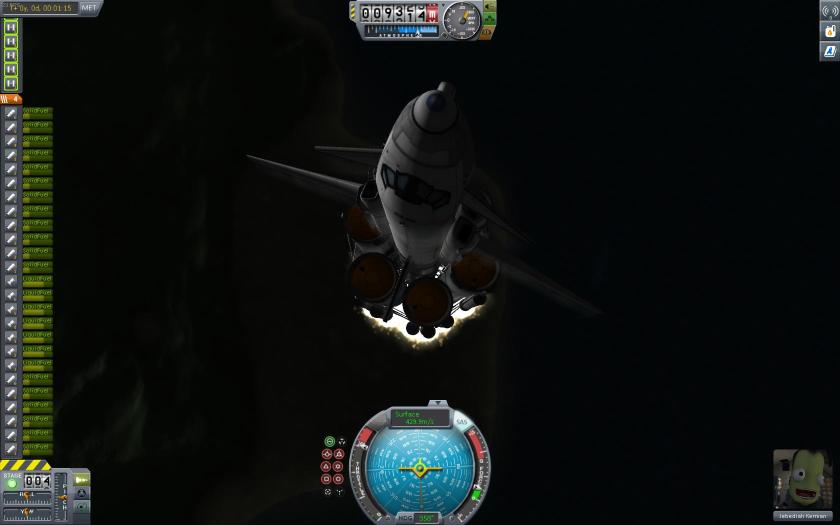 My drifting crew capsule is in orbit. The GRV is in orbit with plenty of fuel to spare. At the moment, nothing is in danger of exploding. Now I can relax and think through other problems. Problems like the fact that I’ve never successfully pulled off a docking maneuver. It sounds like it’s simple enough to do. relatively speaking, spacecraft in a higher or larger orbit move slower than craft in lower, faster orbits. I needed to keep the GRV in a lower orbit than the drifting capsule, and then make a series of carefully timed engine burns to match orbits with the drifter. It sounds deceptively simple, but it’s difficult to get the timing just right so that you’re not way far away from your intended target. It will suffice to say that after quite a bit of trial and error, I got close to the drifters. Excruciatingly close.

3 kilometers away with a relative velocity difference of only 10.5 meters per second. Keep in mind that both craft are more than 300,000 kilometers above the surface of the planet and traveling at 2,300 kilometers per hour. They’re effectively two speeding bullets traveling in the same direction and I’m trying to nudge one of them to piggyback onto the other one. Coming within 3 kilometers with a small velocity difference like that is pretty impressive to me. Did I mention yet that I have no idea what I’m doing? It turns out that the first 300,000 kilometers of the journey is easy, and closing the gap of the last 3 kilometers is the hard part. The very hard part. I thought I understood what to do but my grasp of orbital mechanics failed me here. No matter what I did the drifters floated farther and farther away from the GRV. I tried a short burn from my engines to bring me closer; it pushed me farther away. I tried long bursts from my maneuvering thrusters; they pushed me in the wrong direction. With each attempted course correction my orbit skewed even more in the wrong direction.

After a few mistake-filled minutes I took a deep breath and looked at my orbital trajectory. It was a lopsided egg totally off track compared to the gentle oval of the drifter. To add insult to injury I was now running low on fuel. With my limited resources there was no possible way for me to rescue the drifters and return back to the planet. Rather than have two craft stranded in orbit in two separate orbits I decided to return an empty GRV back to Kerbin. At least I know I can land it. I nudged the GRV back into the atmosphere and begin my descent.

Jeb looks worried. That’s not a good sign. Ever. Why is he worried?

Well that wasn’t supposed to happen. Yes, the GRV blew up. It was torn apart by aerodynamic stresses. There is such a thing as coming into a planet’s atmosphere the wrong way. My speed of 2,500 meters per second probably wouldn’t have been an issue if I’d approached from a shallower angle. As it was I ran into too much atmospheric density too soon and it ripped my spaceplane apart. If I had a shallower approach then the thinner atmosphere would have slowed down the GRV a bit more, allowing for a more gradual and less explodey descent to the planet’s surface. I suppose it’s for the best. If I had successfully retrieved the drifters only to disintegrate upon reentry then I would have been quite peeved.

That’s the thing about Kerbal Space Program: even when an untimely explosion reduces your best plan to bits of flaming rubble, it’s never unfair. Punishing and rarely forgiving, yes; but never unfair.  Every time I’ve failed, and I’ve failed a lot, it’s been the result of something I did. Either my vehicle design was a flying trash heap or I just didn’t know how to fly it properly. It’s a game that’s easy to get into, but difficult to master. There’s no need for a story mode since the best stories will write themselves if you play long enough. That’s the real draw of Kerbal Space Program. Now if you’ll excuse me, I need to go and write the best rescue and recovery story since Apollo 13!