Hitman is a surprisingly smart game of clandestine operations and deadly meetings that can turn into a full-blown chaos simulator if you let it. There are still guidelines and principles you must adhere to, but it’s more akin to being set loose in a sandbox than being told to walk down a hallway. This freedom means that instead of being forced to play the game someone else’s way, you can play it your way.

From a historical standpoint, stealth games and I don’t get along very well. Most of my stealthy gaming experiences wind up being an exercise in frustration for one of two reasons. Either they present some arbitrary gameplay ruleset that doesn’t logically make sense, or there are technical limitations which prevent the game from delivering the intended experience. Whatever the reason, I usually feel like I’m playing some boring, digitized version of hide-and-seek instead of acting like an undercover spy. Not wanting to subject myself to this kind of frustration, I’ve always avoided Hitman games, thinking it was a series rooted in arbitrary rules that just wouldn’t be any fun. I was very, very wrong. 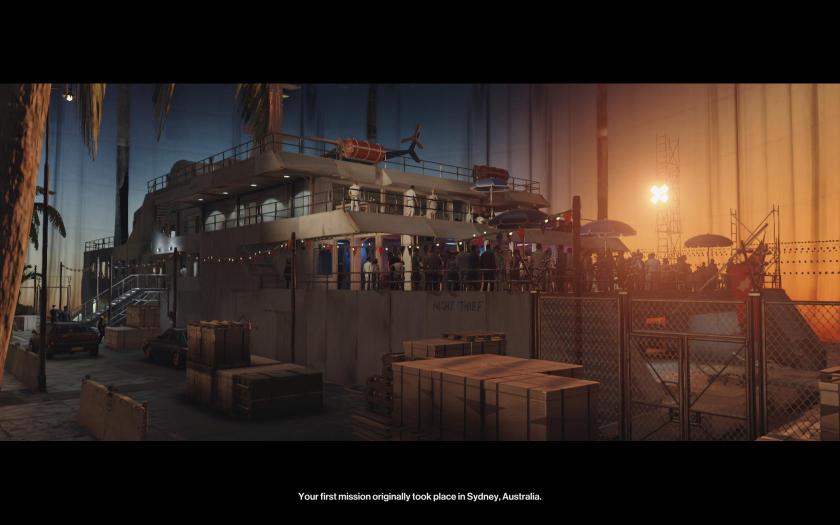 Hitman is a surprisingly smart game of clandestine operations and deadly meetings that can turn into a full-blown chaos simulator if you let it. “Stealth” as defined by Hitman means your number one priority is to blend into the environment. That is to say, hiding in plain sight with the aid of disguises instead of avoiding any and all human contact. Your objective is always to perform a hit, assassinate the target, but you have a bit of freedom in how you do so. Instead of drawing a straight line of strict objectives between you and your intended victim, Hitman gives you a slew of options and lets you decide how you want to approach the situation. There are still guidelines and principles you must adhere to, but it’s more akin to being set loose in a sandbox than being forced to walk down a specific hallway. This freedom means that instead of being coerced to play the game someone else’s way, you can play it your way. 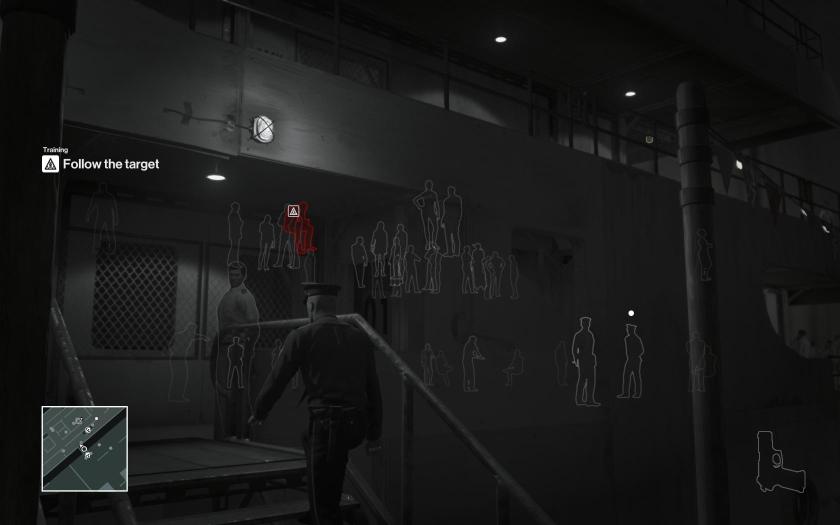 While freedom within a digital sandbox is nice, that freedom is meaningless unless the player is able to discern what is happening within it. Thankfully, Hitman features one of the classiest and useful interfaces I’ve ever seen in a game. Your standard on-screen display features only three constant indicators: a mini-map, a reminder of your current objective, and a slot to show which inventory item is equipped. If you equip a weapon that’s out of character for your current disguise, a warning icon pops up to warn you. Approach usable objects or items, and a notification will pop up nearby to show their availability. The information interface applies to other characters as well. Perform an action that’s inconsistent with your current disguise and the word “suspicious” will pop up. Nearby authority figures who come to investigate will be marked with an exclamation point overhead. If a suspicious party is outside your field of view, a white arrow pops up on your HUD. The larger the arrow, the closer those individuals are to confronting you. Pressing the left control key overlays the screen with “instinct”, which presents information about the people around you. Your target is outlined in blood red. Those that pose a threat to you are identified via circles floating overhead. Anyone who is actively searching for you is outlined in orange. It’s not something to keep active all the time, but it’s a quick way to assess the situation. Each bit of the information overlay is smartly designed and useful to the point that I honestly felt like I could act like I was undercover. Rarely was I frustrated because I didn’t know my cover was about to be blown. As nice as it is to be aware of what’s going on, there were times I felt that the wealth of information was too accessible. Why should I strain to pay close attention to the environment when the game puts a giant dot above of anyone who is a threat to me? It becomes too easy to pay attention to the indicators instead of the environment.

For the most part, all the bits and pieces click together very well and create an experience of tense excitement. But be forewarned: This is not a game for the impatient. Each level is filled with a myriad of disguises and situations which, if executed properly, allow you to complete your objective and escape unnoticed. The flaw here is that you don’t know exactly what those disguises and methods are until you’ve played through multiple times. If the “assassination within a sandbox” concept isn’t entertaining to you the first time through, alternate routes to your objective won’t matter to you on subsequent playthroughs. Hitman definitely appeals to those who enjoy testing the limits of self-regulating systems. Here’s a game that encourages people to sit back and think, “I wonder if I could” because you can usually go back and do exactly what you imagined. And if you’re short on imagination, each scenario comes with a long list of challenges to help you find new ways to play it through.

It didn’t take too long for me to start thinking of all sorts of morbid questions. Can I drown a man in a toilet? What really happens when you pull a fire alarm in a crowded building? Is it possible to murder everyone at the yacht party in the game’s tutorial? How long does it take to beat someone up with a fire extinguisher? Is it possible for an international assassin to pose as a stylist at a fashion show? Hitman encourages you to ask all of these questions and then discover the answers for yourself. In one such situation, my imagination was prompted by one of the game’s challenges: What would it be like to assassinate my target by dropping a life raft on him? The short version: It didn’t end well.

The long version: I started by liberating a uniform from a security guard stationed on the dock, and then took possession of a conveniently placed automatic rifle. Since I was dressed as a non-threatening security guard I boarded the boat via the main ramp, coolly walking past other guards. There were a few security chiefs I had to avoid since they would recognize that I wasn’t part of their ranks, but it was a crowded ship and I avoided their gaze. When I got to the ship’s upper deck, I was all alone except for one other security guard. Since he would think it mighty suspicious for a fellow guard to fool with a life raft, I introduced him to my fiber wire and then dragged his unconscious self to the unoccupied bridge. While there I found a conveniently located crowbar. Time to take a closer look at the life rafts! Switching to instinct mode I saw the red outline of my target rapidly coming my way on the deck below me. I whipped out the crowbar and went to town on the lifeboat support. Large white arrows lit up my screen as nearly everyone on the deck below notices me fooling with the life raft. Just as the life raft becomes dislodged, my target steps out of harm’s way. The life raft falls onto the deck below and explodes in a cloud of splinters. He and everyone else below looks up to where the life raft was to see me, with a crowbar in hand.

Security guard after security guard starts rushing to the upper deck to investigate my actions. I’ve nowhere to go and my cover is in no better shape than the life raft that smashed into the deck below me. Good thing I picked up that assault rifle, because it’s time to go loud.

After a few dozen other targets got in the way, I meet my target. Kalvin, say hello to my gigantic gun:

With my assassination complete and half the boat already filled with bullets, I ask another one of Hitman’s quintessential questions: “Why stop now?” My original objective was to eliminate the target “without any of the guests noticing”. Everybody on this boat knows, so therefore they all must die. Hitman is the game that finally lets me experience what it would be like to be a secret agent. It never promised that I’d be any good at it.

The Hitman Intro Pack is available on Steam for $14.99