For me, most of the game’s challenge comes from managing the monstrous goo structures I constructed. Goo itself isn’t rigid, and neither is a structure built from goo blobs. Everything built will shiver and wiggle like it can barely contain the energy contained within. Imagine a game of Jenga where the blocks of wood are actually made of Jell-O! It’s this variable turns simple puzzles into a chaotic affair.

In the course of my time playing World of Goo, quite a lot of things happened. Information about the game’s world is revealed through in-game signs and cute animations between levels. In spite of these hints, I really had no clue what was going on. At various points I thought I was fighting to reopen an industrial goo-production factory. As I made progress I came to understand that that goo was the source of beauty in the world and therefore used for cosmetic products. Shortly thereafter, I got the impression that goo was the sentient fuel source for all mankind and in the process of revolting. Then things went all The Matrix on me, and I was in a goo-version of the internet, fighting to unleash all the spam email in history in one major blow. Why? I couldn’t tell you. Just when I was most perplexed, everything exploded.

Suffice to say I have no idea what the plot is in World of Goo. All I know is that it’s about utilizing different types of goo to help them get from point A to point B. There are 48 different puzzles in the game. Each one starts with a square frame that holds blobs of goo, and it’s your job to get those blobs of goo to the level’s exit: a suction pipe that leads… somewhere. The blobs of goo swimming on the starting frame can be used to build structures off of that starting framework. Drag a blob of goo near the framework, and it it will be anchored in place by two or more gooey tendrils. Repeat this simple action to build towers, bridges, wheels, and other unconventional shapes as the level demands. Safely transport the required amount of goo around the hazards and to the exit pipe, and you win the level.

There are a number of different types of sentient goo that you’ll need to figure out how to use. Black, “unrefined” goo is the simplest. Click and drag a blob to position it near the home structure. Releasing he mouse button places the goo in that location, supported by one to three tendrils. Positioning goo allows the construction of basic structures. Place a blob of black good, and it’s stuck there. Green blobs can be placed and re-positioned. Clear goo can be linked end-to-end, making a flexible goo chain. Red goo is flammable. There are more types of goo giving the ability to fly, grab onto other surfaces, or imitate skulls. Later on, the game gives you goo blocks. While I question whether or not these actually count as a type of goo, it’s difficult to argue with a block that has an eyeball in the middle of it. Call me weird, but I think the blocks are kind of cute. 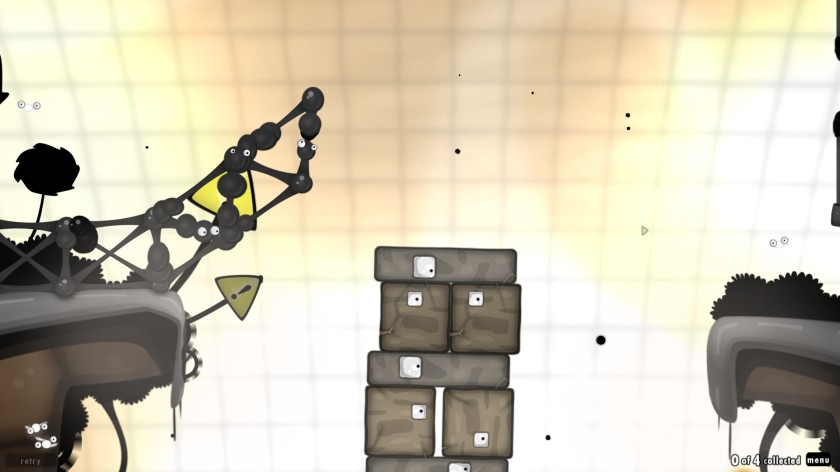 Each level in World of Goo is introduced passively, by way of a wooden sign. Any hints for completing the level are told you by the sign, present in the level’s name, or suggested to you by the position of the beginning elements. Things start out simply enough, such as building a bridge to cover a small gap, or erecting a tower to reach a pipe in the sky. Things quickly become more convoluted as different types of goo are added into the mix. One of the later levels, titled “The Worm”, tasked me with creating a tall tower which I then had to topple end over end to reach my destination. The difficulty curve is finely tuned. Scenarios gradually become more complex, forcing you to try new approaches to the solution. Generally speaking, I felt moderately intelligent for being able to solve each level on my own. There was only level I had to look online to find the solution for.

For me, most of the game’s challenge comes from managing the monstrous goo structures I constructed. Goo itself isn’t rigid, and neither is a structure built from goo blobs. Everything built will shiver and wiggle like it can barely contain the energy contained within. Imagine a game of Jenga where the blocks of wood are actually made of Jell-O! It’s this variable turns simple puzzles into a chaotic affair. Building a simple tower often ends up becoming a race to stabilize the base before it topples over into disaster. There’s a fun tension to wondering if the structure you just built will stay put or keel over in spectacular fashion. I enjoyed my time in the World of Goo. The tone, quality of puzzles, and sheer exuberance with which the game presents itself reminds me of Portal; and that’s high praise indeed. I’m not certain how frequently I’ll come back to play it again, but I’ll certainly remember it quite vividly. And that’s saying something.

There’s no grace, no subtlety to using Vader’s powers. The slightest nudge of the controls results in a disproportionate explosion of force. Trees and wooden barriers shatter spectacularly. Cargo containers take flight and bounce as though nearly weightless. Enemies and allies alike are strewn about like rag dolls. Though the force powers respond to your commands, rarely will you feel completely in control. But in a sense it fits, because when is the rage of a Sith ever synonymous with precision?

Welcome to First Impressions, where I relay my experiences of a game’s opening moments.

I am become death, destroyer of Wookies. The force is with me, and by it the world conforms to my will. I am Vader unleashed, and nothing shall stand in my way.

As far as opening levels go, the one for Star Wars: The Force Unleashed is a doozy. While most video games start out small, giving players a limited tool set and gradually introducing them to core gameplay mechanics, Unleashed goes all in. Within three minutes of starting the game, I’m controlling one of the most iconic villains in sci-fi history. Not only that, I’m using force powers to smack around a planet full of Wookies. Wookies. Remember them? The big walking carpets that pull peoples arms out of their sockets when the lose a game? As Darth Vader, I crush them more easily than a trash compacter crushes rebels. 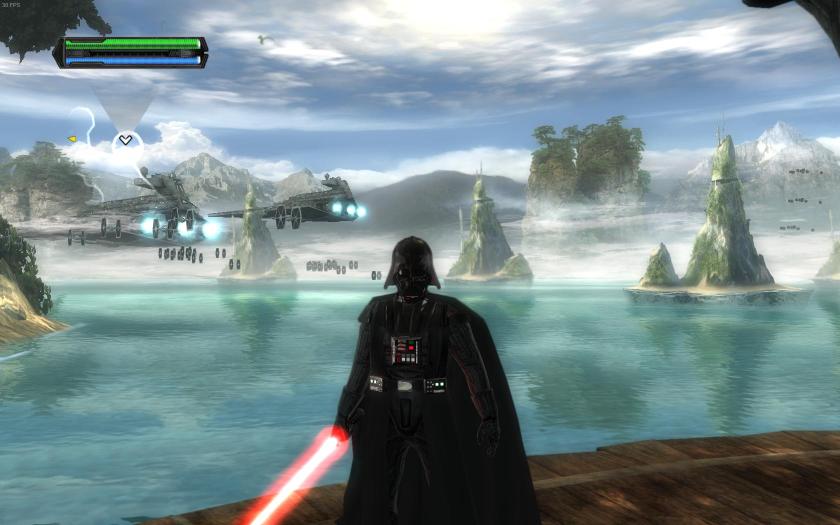 Vader is on Kashyyyk to continue his quest of eradicating the last remnants of the Jedi from the universe. Rumor has it there is one here under the shelter of those furry monstrosities. Your mission is to hunt him down and take him out. As you step off the Imperial shuttle onto the planet, it’s worth pausing for a moment to take in the spectacle. A half-dozen Imperial Star Destroyers skim the surface of the planet, launching hundreds of TIE Fighters that scour the planet’s surface. Stormtroopers have already started to forge a path for you, engaging squads of Wookies with orange blaster fire. An impressive sight, but not as impressive as a Dark Lord of the Sith and his mastery of the force. Enemies of the dark side have more to fear than his iconic red lightsaber. Vader also has at his disposal two force powers. One allows him to pick up individual objects in the environment and move or throw them at will. The other is a force push which can be charged to let loose a force blast, sending shock waves of concussive force cascading outward.

There’s no grace, no subtlety to using Vader’s powers. The slightest nudge of the controls results in a disproportionate explosion of force. Trees and wooden barriers shatter spectacularly. Cargo containers take flight and bounce as though nearly weightless. Enemies and allies alike are strewn about like rag dolls. Though the force powers respond to your commands, rarely will you feel completely in control. But in a sense it fits, because when is the rage of a Sith ever synonymous with precision? It’s called “blind rage” not because the actor has no knowledge of his actions, but because such rage will inflict itself upon anything that happens to be nearby. This is exemplified perfectly by Vader’s poor and hapless allies, those lowly Stormtroopers. Force powers affect them, too. The powerful blasts that knock Wookies asunder will do the same to your minions. Those unfortunate enough to survive your wrath may earn your sympathy as they scream in terror and run from your terrible presence.

Vader doesn’t run, though. He can’t. The game won’t let him. There’s no need. When you’re this powerful, you don’t need to run. Sometimes, it’s good to be the bad guy.

Nothing can hold back the Dark Lord of the Sith. 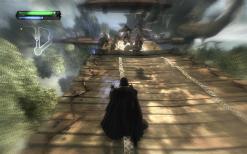 Over the top? Yes. But it still looks fantastic!

I want YOU to join the Galactic Empire!

Hold still, that will make it easier for both of us.