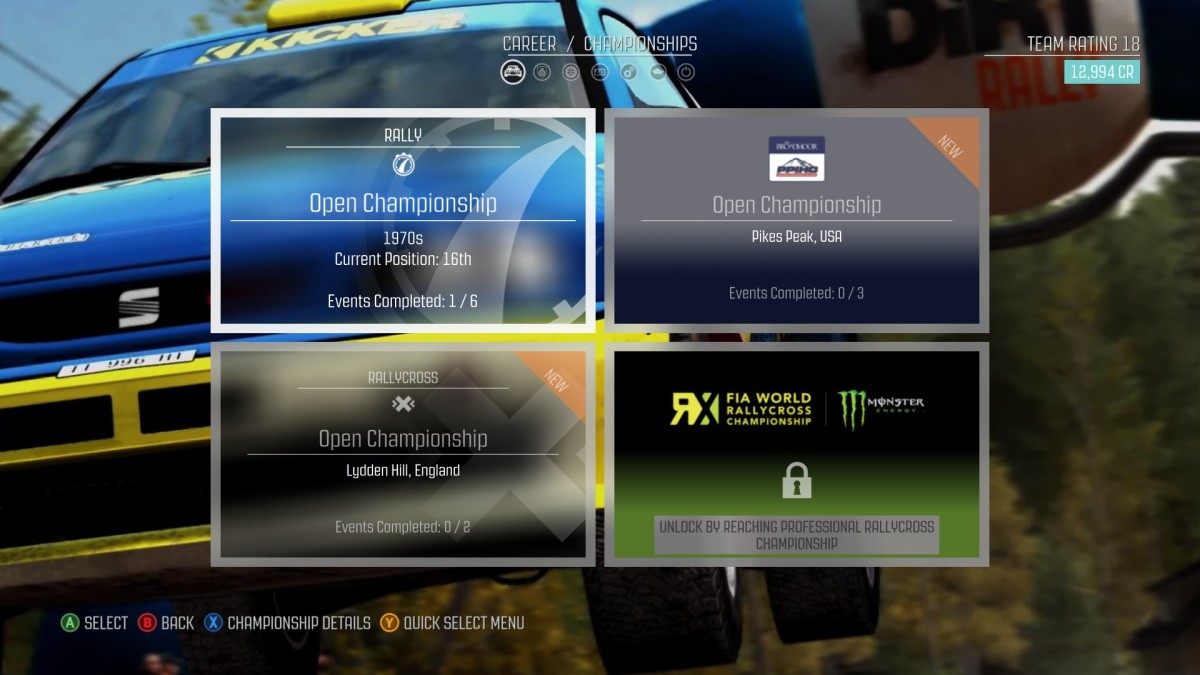 A game built around rally racing seems like it would be something I enjoy. Just me and my car on long, winding tracks in a race against the clock. My primary opponents are dirt, snow, hairpins, hills, and jumps. I’d overcome them all with ease, flinging my metal machine over and through them all at breakneck speeds. Me and my car on a dirt track in a race against time. Drive a car, go fast, don’t crash. Sounds fun, right?

It sounds like a ton of fun. But in reality, Dirt Rally is the most stressful racing game I’ve ever played.

That’s not a knock against the game. It’s the realization that Dirt Rally and I are not well suited for one another. If racing games were movies, I’d prefer the ones made by Michael Bay. The kind where you wind up jumping a big rig over an exploding gas station. Dirt Rally is not that kind of game. CodeMasters, the developer behind the game, touts its “challenging, uncompromising handling model” that “adequately capture(s) how it feels to race across changing surfaces”. It’s totally a simulation game, not an arcade racer.

Playing a racing sim demands that you unlearn almost everything you already know about playing arcade racing games. Using the e-brake to slide around corners, drifting, grinding side walls without consequences; none of those things work here. I mean, you actually have to use the brake and slow down before going into turns! If you don’t, you’ll understeer and run off the far side of the track.

Your racing mistakes accumulate on your vehicle. Every missed turn, every rail smashed, every crash results in damage to your car that makes it perform worse. By the end of some races I was in command of a hulk of steel that barely qualified as a car.

If you have any skill at sim racing, Dirt Rally has a lot to offer. Gorgeous visuals, a lengthy career mode, lots of cars to race, staff maintenance; it could keep someone’s attention for quite a while.

But in the end it comes down to your ability to keep a fast-moving car on a perilously narrow track. That’s an ability that I lack.

This is me racing, very, very poorly on a snowy track. Game looks and sounds great, my driving stinks.

After mulling it over for several hours I finally made the realization that the real failure of Battlefront isn’t how it looks, or how it plays: it’s how much I care about what’s going on. Yes, these are spectacular battles rendered with craftsmanship and fidelity never before seen in a Star Wars game, but I just have no reason to care about any of it. […] Having said all that, I’ll buy the game the next time it’s on sale for $20 or less.

I wanted to totally fall in love the new iteration of Star Wars Battlefront, I really did. Considering it combines two things I absolutely adore, Star Wars and action games, by any rights this game should be a perfect fit for me! And yet, in spite of having spent an entire weekend with the prerelease beta and another four hours with the full game this past weekend, it just hasn’t hooked me yet. After feeling somewhat disappointed by the beta I had hoped the newly-released skirmish mode for offline play would be enough to win me over. And yet, all the free trial managed to accomplish was to cement my sense of indecision. It comes down to the simple reality that Battlefront has no soul. And that makes me sad.

On the surface, it has all the things that fans of Star Wars and of action games could ever want: dazzling graphics, phenomenal sound engineering, the rousing orchestral score from John Williams,  some of the planets, characters, vehicles, and weapons we know and love, and exquisitely detailed game environments. Make no mistake, Star Wars: Battlefront is the Star Wars-iest Star Wars game I’ve ever played, and I’ve played a lot of Star Wars games. The miracle workers at DICE are to be commended for creating what is, quite frankly, the most beautiful and most complete rendering of the Star Wars universe in a video game. Every pixel, every sound, every movement, every object, every environment is 100% certified Star Wars. But considering the cinematic inspiration for the game distinguished itself by imagining an imperfect and dirty universe, the perfect rendering of that world in a video game somehow feels shallow. The end result is that the game feels more like an impression of an experience than the genuine article.

In spite of the beautiful and immersive environment, there’s something that just doesn’t feel right. Oddly enough, it’s not the gameplay – even though it is simplistic to a fault. The actual mechanics of the game are more than fine. Shooting feels good, navigation and movement is spot-on, the game modes feel like they’re taking place in a galaxy far, far away, and all of the different parts contribute to an escapist whole. After mulling it over for several hours I finally made the realization that the real failure of Battlefront isn’t how it looks, or how it plays: it’s how much I care about what’s going on. Yes, these are spectacular battles rendered with craftsmanship and fidelity never before seen in a Star Wars game, but I just have no reason to care about any of it.

Battlefront puts you squarely into the shoes of a no-name soldier to show you a ground-level view of the war between the Rebellion and the Empire. From such a low perspective the morals and motives of either faction don’t matter. Survival is the name of the game. The Rebels are always ill-prepared and fighting against the odds, and the Empire is always a military superpower trying to quash dissent. There’s no real motivation to fight for either side other than the fact that this is the way it’s always been. In a sense this might be considered one of the game’s successes, that it replicates the experience of being a pawn in a large-scale galactic war; but I believe it’s also why the game feels so empty. For a franchise that was the catalyst for millions of people to imagine themselves as a hero in a galaxy far, far away, spending hours in a game as an ordinary foot soldier is a bit of a letdown. Focusing on the little guys and giving them repetitive and relatively small-scale objectives removes the context from the fight and turns what should be an epic clash into just another day on the battlefield. Star Wars has always been a grand space opera about ordinary people becoming extraordinary and then doing heroic things. Even though Battlefront allows players to “be the hero” with powerups, there’s no real justification for their presence on the battlefield and they end up feeling like nothing more than a fancy costume for the ordinary soldiers. In spite of how much you want your role to have a sense of significance to it, the game never gives you that empowerment. No matter what you do you’ll be just another pawn fighting in a war against other pawns. At the risk of mixing up my metaphors, Battlefront ends up feeling like playing checkers when you want to play chess.

Having said all that, I’ll buy the game the next time it’s on sale for $20 or less.

Wait, what? Yes, I’m going buy the game when it goes back on sale. There are two reasons why. The first of which is that, for all its shallowness, it is still genuinely fun to shoot at wave upon wave of stormtroopers. The second reason being that Star Wars Battlefront may be the proof that EA DICE has what it takes to do some incredible things with Star Wars games, and that’s something I want to support. The developers obviously care a great deal about the source material, packing the game full of details most players will miss. A prime example is on a map for Supremacy on Endor, which is set at nighttime. A few minutes into the game I approached the outer border of the map which happened to be the bed of a lake. As I turned my character to pan the camera around my jaw dropped slightly. Sprawled out before me was a tranquil lake with a cluster of teepee-like dwellings perched over the water. Looming ominously overhead was a pair of Star Destroyers while the uncompleted Death Star dominated the twilight sky. This in-game scene is obviously directly inspired by Ralph McQuarrie’s original concept paintings for The Return of the Jedi. This glimpse of the real Endor displays how much attention the development team paid attention to the details that make the Star Wars universe special, even if those details are subservient to a grander and more boring big picture. If DICE can do this as icing on the cake in a multiplayer shooter, I’d love to see what they’re capable of in a dedicated single-player experience!

In the meantime, I’m learning that even shallow games have their beautiful moments. It took me four hours before I noticed one on Endor, maybe Battlefront has more to discover?