Turns out, murdering a fellow agent isn’t the thing to do if you want to earn favor with your boss. But surprisingly enough all I got was a scolding. […] In retaliation for the betrayal, they’ve remotely deactivated Paul’s augmentation and activated his kill switch. Your brother has twenty-four hours to live. If Paul has a kill switch, that means I do too. Step out of line, and the powers that be will snuff me out. This kind of puts a dampener on morale; nobody likes to work for a jerk! 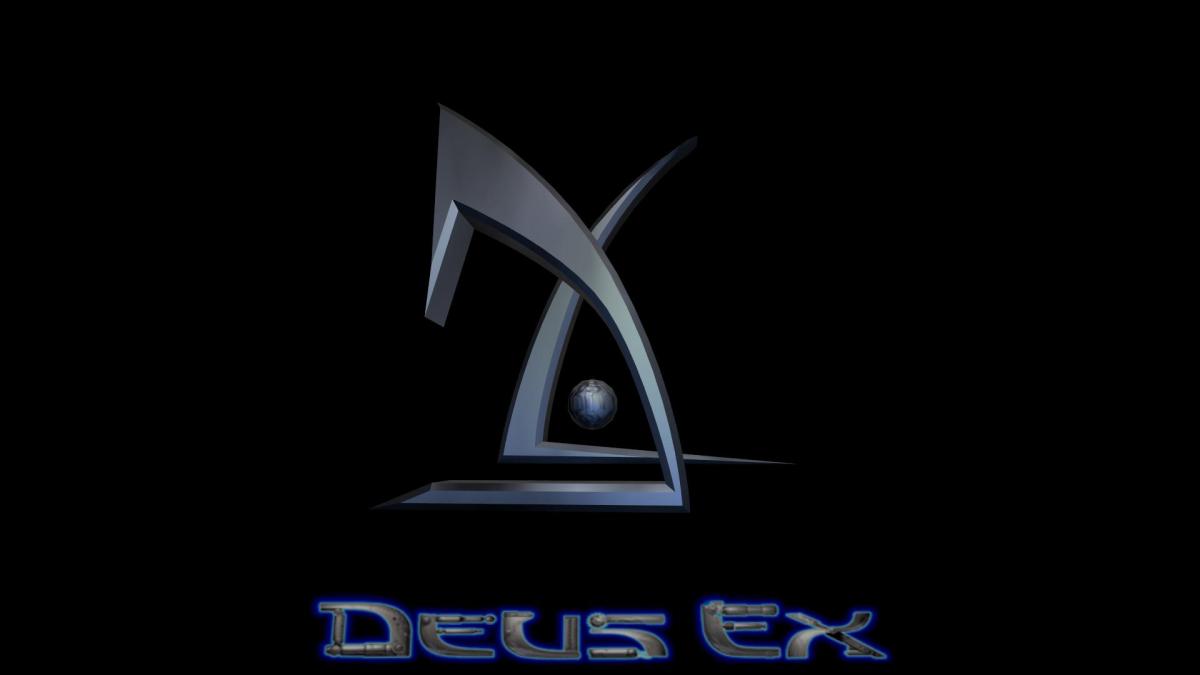 This post is the fourth in my series which chronicles my journey through the original Deus Ex. Read part three here.

The pursuit of stolen Ambrosia continues. I’ve successfully traveled to the private section of LaGuardia airport in pursuit of Juan Lebedev, the man behind the theft of the Ambrosia vaccine. According to Joseph Manderley, my boss at UNATCO, “Lebedev poses a continuing threat to UNATCO. He is also a dangerous man, and if the operation should result in his termination rather than capture, there is no doubt that the agent responsible would be found acted appropriately and with the full force of the law.” Lebedev is loading the stolen vaccine onto a plane in preparation for transport elsewhere. My job is to find him and the vaccine, and prevent both of them from leaving the airport. 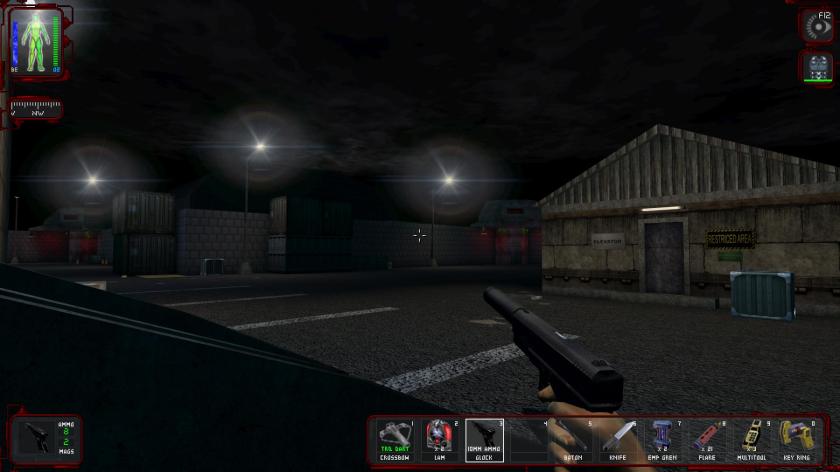 Sneaking around the airport was tense, but not as difficult as I thought it might be. Due to my unfortunate resort to violence in the last mission, I was well stocked on tranquilizer darts here. There were a few security bots I had to sprint away from, but I was able to get the drop on most of the security guards. Outside of the the airplane hangar, my main objective, I had a little bit of trouble with the guard house. There were two ways in: a door, and a second-story window. Entering through the door put me in full view of two NSF troops. There was no way for me to incapacitate both before one of them triggered the alarm. Going in through the second-story window put me in a dorm room. There were some supplies, but I needed a lockpick to get out, and I didn’t have one. At this point I’m starting to wonder if lock picks really are so fragile, or if the game has made them disposable for the sake of balance. It’d be kind of overpowered if I only needed a single lock pick to open every locked door in the game, right? To get in the guard house, I wound up going back outside through the window, and tossing a few metal crates around. The noise attracted one of the guards from inside, which I batoned into submission. This left me free to give the remaining guard a dart-infused nap. Obstacles removed, I stood freely in front of my objective: Lebedev’s 747. 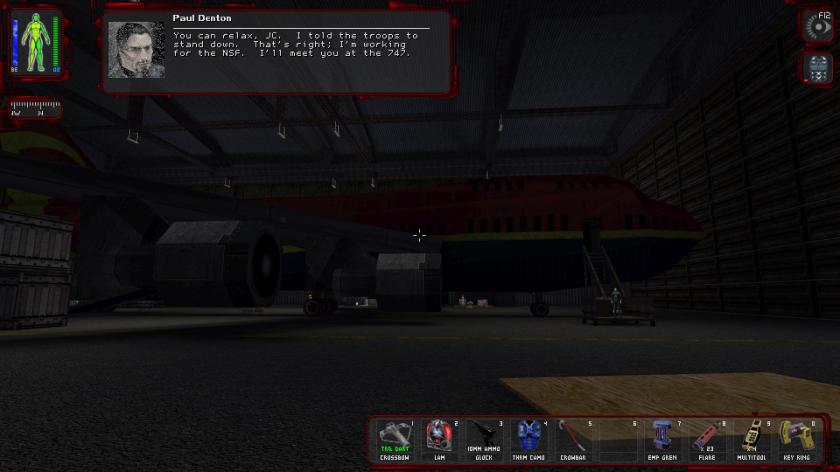 Betrayal! In this hangar I find a terrorist-operated 747, a barrel of stolen vaccine, Juan Lebedev himself, and my dear brother Paul waiting on the front steps to greet me. He’s a double-agent, affiliated with the NSF but working undercover at UNATCO. Shocking? Maybe to some people, but it was pretty clearly telegraphed by the game up until this point. What I didn’t expect it what Paul tells me about the virus. The Gray Death is a man-made virus, which means someone unleashed it intentionally. Since UNATCO is the only organization capable of creating and distributing the cure, every organization on earth is subject to their whims. Earth is controlled by bankers. Who’d have thought?

I go into the plane and prepare to meet Lebedev. Before doing so, a friend of mine suggested I plant a LAM, Lightweight Attack Munition in the hallway outside our meeting. It seems a bit odd to me to plant an explosive outside of a peaceful meeting between a government agent and a world terrorist, but who am I to judge? 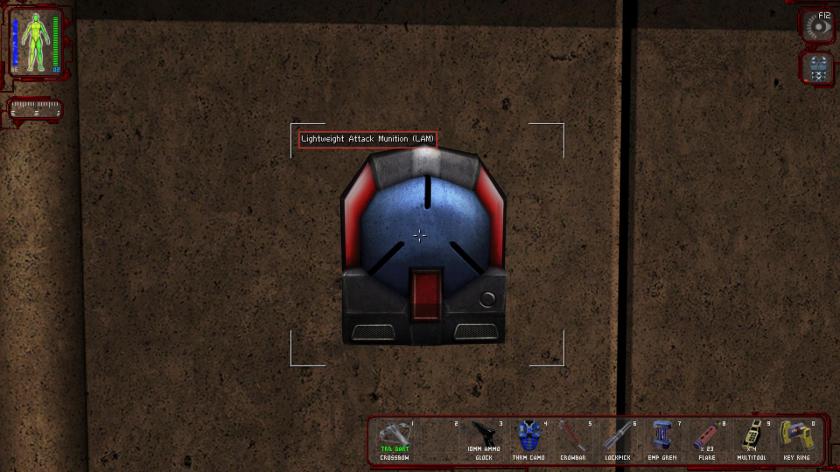 Explosive planted, I walk in to interrogate Lebedev. He surrenders and says little else. My conversation with him ends, and the hallway outside his room explodes. A second later, I hear footsteps walk past me and into the bathroom. Following them inside, I notice that Anna Navarre is cloaked and registering as a hostile. Shooting her a few more times, she falls and then explodes. Cybernetically augmented agents do that, apparently. Wait, what? I planted the explosive in the hallway, and Anna detonated it. The explosive is triggered by any kind of motion, friend or foe, so that’s why it detonated. The blast wasn’t enough to kill her, but she registered it as an attack and responded by activating her built-in cloaking defense. At this point, she is hostile towards me since I planted the explosive. I had to shoot her a few more times to preserve my life and Lebedev’s. She then died, at which point her cybernetic implants went into overload and exploded so nobody could recover them. 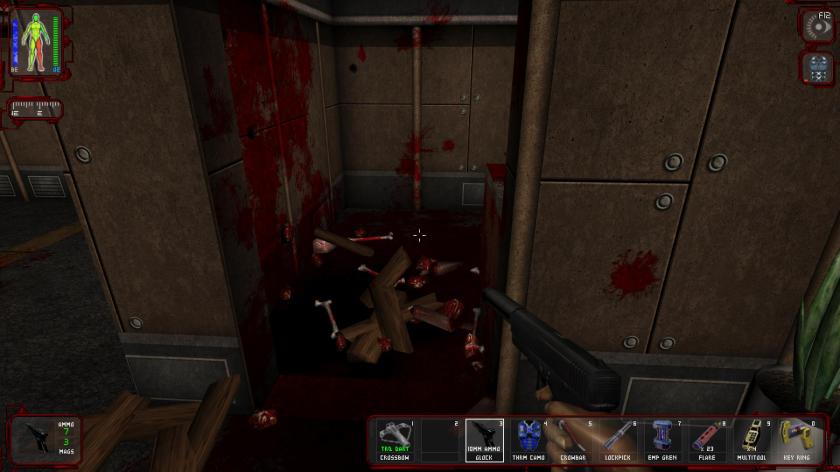 So what would happen if I didn’t try to explode Anna preemptively? Deus Ex is great in that it gives nearly unparalleled player freedom, but it doesn’t necessarily make clear what the alternative options are. As it turns out, if Anna had come into the meeting between JC and Lebedev, she would have issued an ultimatum: Kill Lebedev or she will. Kill the prisoner, and you both go back to UNATCO. JC would be riddled with the guilt of murdering an unarmed man; a man who his bosses claim is a terrorist. In addition he’d be no closer to knowing why his brother betrayed an organization that’s the embodiment of international cooperation. Kill Anna, and you’ve betrayed the world government and will presumably suffer their full wrath.

Since killing an unarmed prisoner isn’t my cup of tea, I decided that to betraying my host organization was the moral thing to do. It was a good thing that Anna had been removed from the picture. After she, er, departs, Lebedev is in more of a talking mood. He states that JC and Paul are genetically-engineered humans; a pioneering experiment in the absolute control of mankind. UNATCO is a lie, that it’s just a puppet for the real threat: a secretive organization called Majestic-12. Why else would there be only one corporately-manufactured cure to a global plague? Shouldn’t the recipe for healing be transmitted to any company that’s capable of manufacturing it? The Gray Death is about controlling the population. The NSF was working on getting the vaccine to a man in Hong Kong named Tracer Tong. He’s working on reverse-engineering the cure so it can be mass-produced and distributed to the masses.

Treason committed and sinister plot uncovered, it’s time to go back and report to the boss. Manderley is not happy. 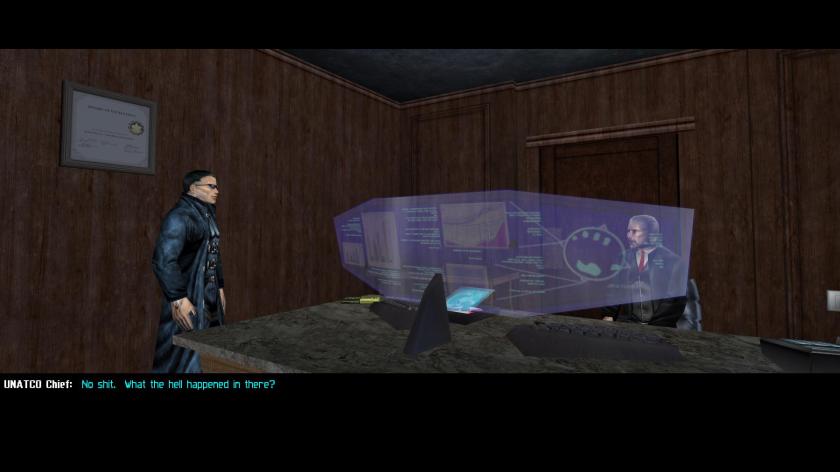 Turns out, murdering a fellow agent isn’t the thing to do if you want to earn favor with your boss. But surprisingly enough all I got was a scolding. Manderley was happy enough that they were able to take Lebedev into custody, but he’s very upset at Paul’s abandonment. In retaliation for the betrayal, they’ve remotely deactivated Paul’s augmentation and activated his kill switch. Your brother has twenty-four hours to live. If Paul has a kill switch, that means I do too. Step out of line, and the powers that be will snuff me out. This kind of puts a dampener on morale; nobody likes to work for a jerk! To make things worse, my next official assignment is to go to Hong Kong and execute Tracer Tong. UNATCO takes their anti-competition clauses quite seriously.

I walk over to the helipad and meet up with my pilot, Jock. He’s not taking me to Hong Kong, but rather back to Hell’s Kitchen. Paul returned to his apartment and is in need of my help. You know, since he’s being murdered by the people who made him. Upon capturing Lebedev’s jet, UNATCO now has the locations of many other NSF agents around the world. This puts Paul’s allies under the hammer, and they’re getting wiped out left and right. Paul went back to Hell’s Kitchen because there’s a communication center nearby he can use to broadcast a warning to his friends. 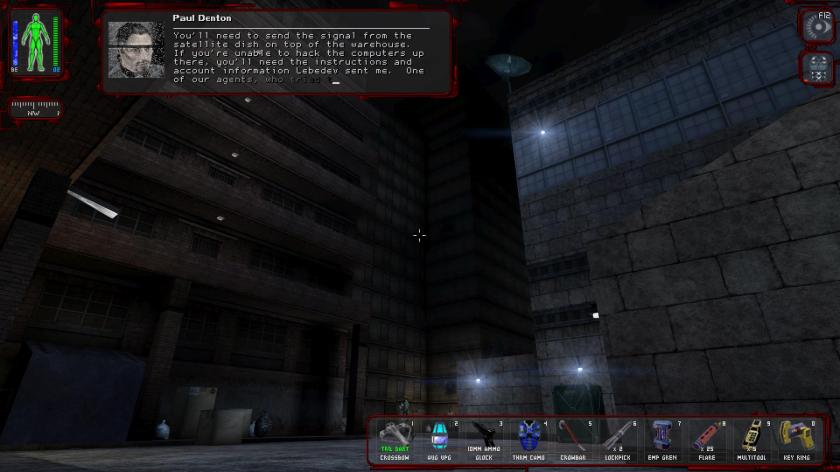 There’s a lot to this section, but I think the most important thing is that I (finally) learned how the game’s durability system works. Doors, panels, and certain other objects have ratings assigned to them. These ratings make it easy to see how difficult it will be to access them. Take a look at the screenshot below; there are two ways to gain access to it. In order to open it up, I need to either use two lock picks or deal more than 10 damage to the door. 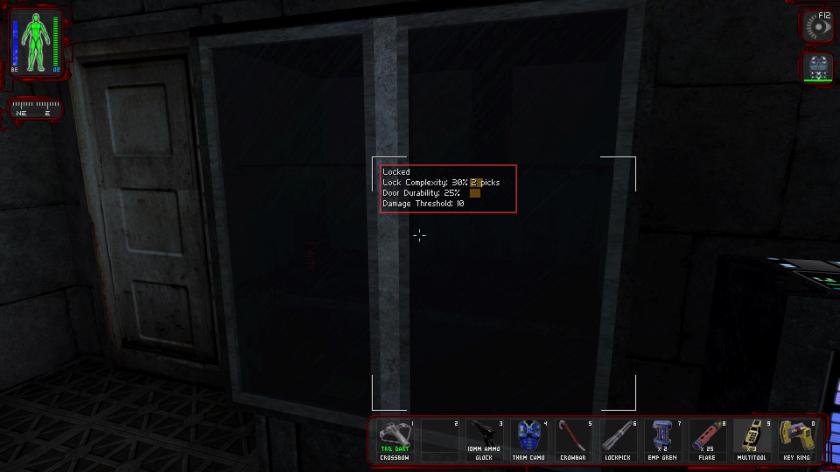 Thankfully, the damage stats for each weapon in your inventory is pretty easy to read. My upgraded pistol deals 16 damage per bullet, making it a very logical choice to get that cabinet open. 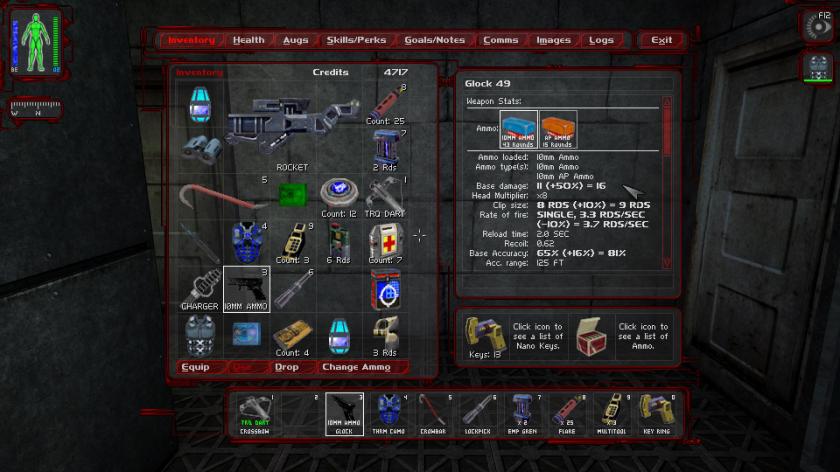 However, there’s a door right next to that cabinet that required some… more powerful… methods in order to get it open. 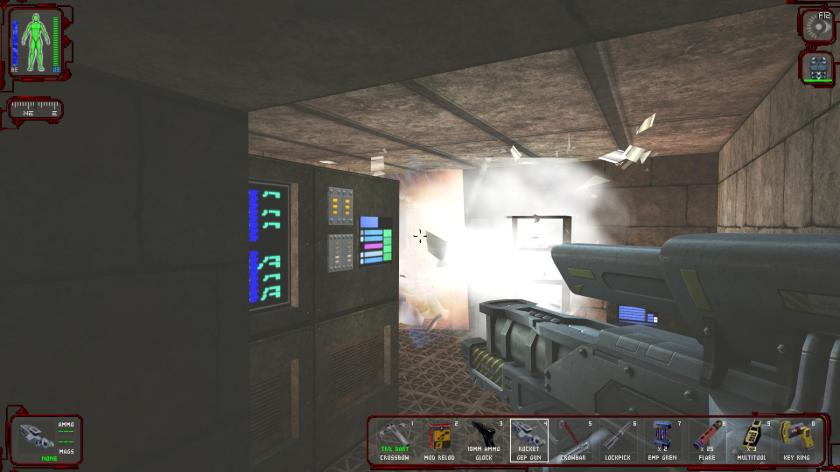 The room that I blasted my way into contained some incriminating data on UNATCO. Paul needed me to broadcast that to the world along with the warning to other members of the NSF. This required I work my way back on top of a building to get to the broadcast terminal. Since I was still friendly towards the UNATCO troops who occupied the building, this was not a problem. However, part of being a cybernetically-powered super soldier is the always-on monitoring software. It’s this feature which allowed my tech support Alex to record – and then delete – my interaction with Anna on the jet. This is the same feature that allowed Walton Simmons, evil robotic overlord, to witness me broadcast a signal to the NSF in real time. Since he, through some malevolent influence, commands all UNATCO forces, this was a problem for both me and my brother Paul. Now we’re both enemies of the state.

Paul was back at his apartment, sitting defenseless whilst surrounded by now-enemy troops. When I make it back to visit him, he tells me to run for the subway station and leave him there. Leaving and running is the most logical thing to do. I possess no heavy weapons, and even if I did I don’t have the training to use them effectively. There are at least a dozen human soldiers to contend with, as well as two or three tough Men In Black. The only problem running away is that if I do so I also condemn my brother to death. Leave, and he’s out of the story. Considering that it’s his influence that caused me to betrayed the only peacekeeping government on the planet, there’s no chance I was going to just let him sit there and die. 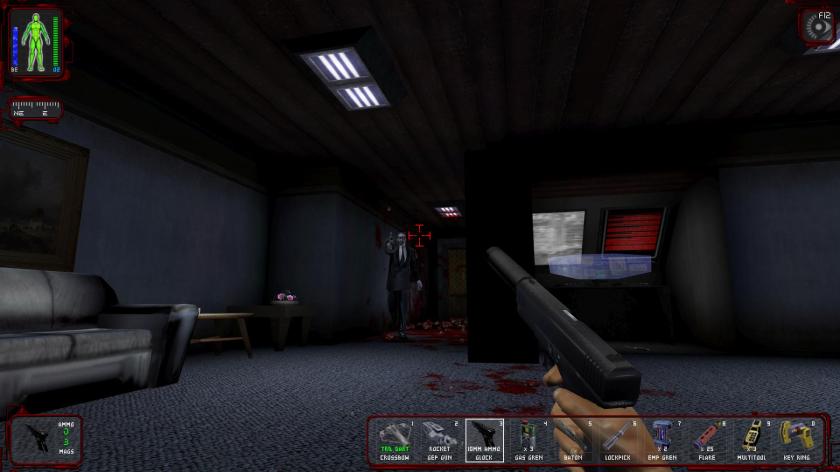 Since my armament consisted of little more than a pistol and a mini crossbow, this was a tough fight. I had to resort to using my one LAM to take out the Men In Black, and that was barely effective enough. My pistol proficiency was good enough that I could stay crouched and land head shots consistently, but the ammo reserves dwindled very quickly. The lobby of the ‘Ton held a more challenging fight. A dozen or so UNATCO troops wait stationed at various locations, all of them holding different armaments. I had to save, reload, and reload again to find a path that worked effectively. In the end it took a combination of pistol shots, tranquilizer darts, and a well-placed gas grenade to ensure that my brother and I could leave the hotel alive. After the battle Paul pushed me towards my only route of escape: the subway. Unfortunately, Gunther was waiting to remind me that there is no escape from scary robot men. 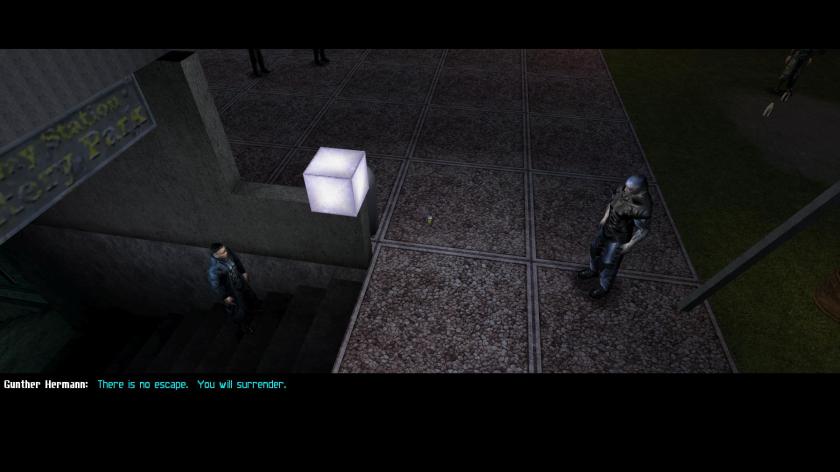