True to my New Year’s pledge, I’ve begun playing some of the previously untouched games in my library. I’m now about an hour into Diakatana and so far the game has taught me two things:

One: In this dystopian cyberpunk future alternate reality, blue collar workmen are terrified of techno-frogs.

Two: This cyberpunk future has taken sewer boxing to the next level:

Every time you put them on you watch the animation of your character pulling a cord to start what sounds like a 2-cycle engine. The sound persists as your hand vibrates, waiting to… punch people to death?

I expected to have a lot to say about this game, and I probably will later on, but this moment has left me kind of speechless.

“Here is a sandbox where you get to play with all the different game mechanics; figure it out and have fun doing so. I don’t think I’ll ever forget the second half of that mission. It takes place in tunnels underneath the base and is guarded by devious four-legged security bots that don’t hesitate to electrocute you to death. “

I finished Deus Ex. Finally. It took about 30 hours of play time spread out over an extremely busy over four months, but I did it. My first thought after seeing the end credits roll? This game is way, way too long. Even so, I now understand why Deus Ex is regarded as one of the best and most influential games of all time. Ultimately it comes down to player agency, and providing a gameplay environment for it. There’s almost always more than one way to do things, and one option is just as valid as the other. Enemy encampment? Kick down the front door and run in guns blazing, or sneak through a vent knocking goons unconscious with your billy club. It’s possible to beat the game without killing anyone. Ridiculously hard, but possible. Deus Ex is the first game to offer this amount of choice to the player, and do it well. 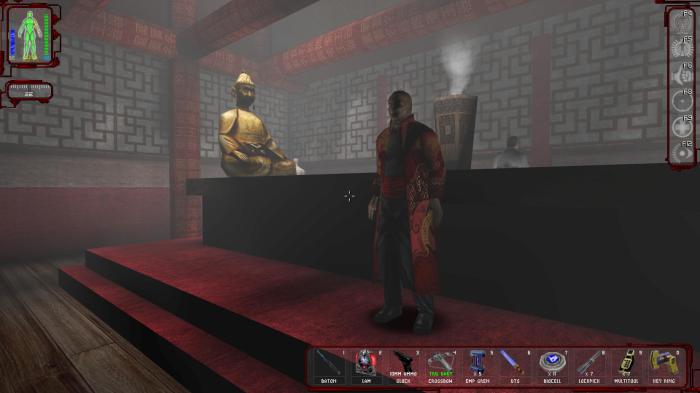 The game falters a bit at about the halfway point, in Hong Kong, because that’s where it should have ended. At this point you discover that the global plague is manufactured by the UN as a way to control the people. They manufacture the plague as well as the cure, doling out either as they see fit. Ideally, the game would have wrapped up here with a mission or two where your character destroys the plague, manufactures the cure, and saves the world. Instead, more conspiracies and secret organizations are added to the fray. The Illuminati show up, as does a rogue AI, a few crime syndicates, and a lot of powerful angry white men. It didn’t take too long before I forgot who was an enemy, who was an ally, and why I cared about anything that was happening.

In spite of the story threads resembling a plate of spaghetti, the gameplay stayed pretty sold through it all. My favorite, and most memorable mission is probably Vandenberg. Jock, my personal helicopter chauffeur, drops me off on top of the main building of a military base that’s just been taken over by the bad guys. I walk around on the roof to get the lay of the land, mark out targets, and evaluate potential points of entry into the base. It’s a setting that encapsulates the spirit of the game. Here is a sandbox where you get to play with all the different game mechanics; figure it out and have fun doing so. I don’t think I’ll ever forget the second half of that mission. It takes place in tunnels underneath the base and is guarded by devious four-legged security bots that don’t hesitate to electrocute you to death. Just fighting one of those robots is a challenge if you don’t have the right weapons, let alone a half a dozen.

And that example illustrates one of the problems with player choice: it’s all too easy to make decisions that come back to haunt you. Spending skill points on pistols is a great idea until pistol skills are all you have to deal with a half-dozen murderous electrocution robots. These decisions also extend to your personal cybernetic upgrades. Each upgrade is picked up as an item that fills an inventory slot. They can only be installed in certain parts of the game by a medical bot. Each upgrade serves one of two functions and can’t be reassigned. Though the game does offer a description of what each upgrade does, it’s difficult to grasp the gameplay ramifications until you have a chance to use it. While in Hong Kong, I found an upgrade that let me choose between an Aggressive Defense System and a Spy Drone. I went with the defense system because it sounded better. However, I had spent the entire game up to that point building a stealth character and the defense system – used during open combat – would be practically useless for me. The spy drone would have allowed me to deactivate turrets, cameras, and yes; even murderous electrocution robots. Live and learn, I guess?

As convoluted as the story is, the game’s final chapter wraps things up in a relatively satisfying way. As the mission progressed, I received personal communiques from the main faction leaders asking me to act on their behalf. Even though at this point I had little clue how the major players fit into the overall story, the game gave me a clear path for how those stories would conclude. I could either merge with an AI to lead humanity in peace and harmony, let the Illuminati take over and do things they way they’ve always been done, or I could destroy the global communication grid and plunge the planet into a New Dark Age. New Dark Age it is! All it took was the disengagement of some coolant lines and overloading a reactor and the world as people knew it was over. Seems like it should be more difficult than that. My only complaint is that while the game gives the player full freedom to choose the ending, the result of that choice isn’t conveyed in a meaningful way. After pressing the button to blow the reactor, I got treated to a scene that shows my character running through an exploding room and then the game ends with a quote superimposed over a globe. I expected to see some bums huddling around a fire in the darkened ruins of New York or Paris. My actions would have had more impact if the game had shown what this New Dark Age looked like.

Deus Ex is widely regarded as one of the best, most influential games of all time. Having completed it, I can understand why that is. Playing through titles like Thief, Prey, Dishonored, Alien: Isolation, Bioshock and others; it’s easy to see the influence of Deus Ex. Some of the greatest games since 1999 have buit on the foundation laid by Deus Ex;. Even though it’s hampered by a convoluted story and a bit of bloat – expect to spend 25+ hours to get through it – it’s still one of the best games you can play today.